The Jordanian government knows how to raise awareness about the environment: Glamour

The people who might be able to do something to help the environment are the same people who holiday in five star resorts and stop at the Middle East's only drive-thru Starbucks as they zip to work in their flashy SUVs. 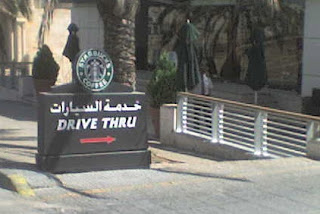 So, if Jordan wants to get its population on board in saving its fragile ecosystem - and a very fragile system it is! - meanwhile earning serious brownie points with the huge numbers of greenconscious Westerners who pass through its land each year... Glamour is the word of the day.

In fact, the Royal Society for the Conservation of Nature, as it is called, has set up nature reserves throughout the country. These reserves are more about the glamourous ecotourism than about the preservation, though. (After I visited one such site, Wadi Mujib, I questioned whether this particular reserve was actually preserving anything to start with.) 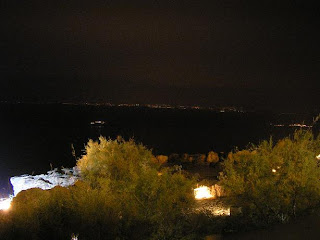 My last day in Jordan, we visited the Dead Sea Panorama complex, the newest nature reserve to be receiving tourists. It's an amazing clifftop location overlooking the Dead Sea and Palestine beyond.

As we sat on the courtyard terrace, sipping our virgin cocktails (the real kind were available, too), looking out at the beautiful view, we perused the menu. The restaurant is a lovely state-of-the-art facility with a rather nice menu of Lebanese food. It'd be the perfect setting for a wedding reception or something of the like.

My friend decided she'd like to smoke an arguile (hookah, shisha... that stuff), but the waiter apologised. He said they don't offer arguile because the land is a nature reserve. My friend apologised profusely for even suggesting such an affront. Then her sister lit up a cigarette, and the waiter brought her an ashtray. One can only push the envelope so far for the sake of nature!

There really are some lovely facilities and several of them are quite eco-friendly. Like the Fenan lodge, which is all solar-powered, meaning that people mostly walk around with candlelight at night. I've heard it's gorgeous: a candlelit B&B in an idyllic setting. Or the nearby campground where they set up the tents for you and make sure you're fed, and offer some sort of showering facilities. 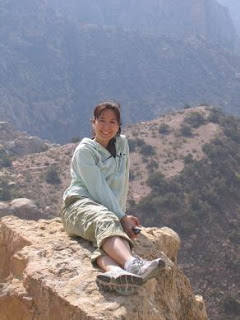 Nonetheless, these reserves continue to be an adventure. We're allowed to clamber endlessly and freely over rocks and through gorges. Some of it's actually a bit dangerous. At the Dead Sea Panorama, apparently the "be careful by cliff's edge" signs are a recent addition. Anyone want to guess why? There's barely a beaten path to follow when hiking and no one really says anyone if we fall away. As we do so, we get to know our environs, see little critters us city folk don't recognise and identify unusual plant formations. Glamourous it may be, but somehow it's still rugged enough to feel green.
Posted by Kati patrianoceu at 7:49 PM