Portrait #95: Dili seen through my eyes

Since I choose to blame the lack of internet access at my house for my ongoing blog silence, it seemed appropriate to appear here today with a pictoral essay of where I live. One day, as I was walking to my house from my work, I took some photos along the way.

Please note, I work in an upscale-ish, quasi-downtown neighbourhood. And I live in a neighbourhood known as an inner-city ghetto. But somehow, it upscale and ghetto urban living are not what comes to mind when I walk this way.


1. Our office compound's wall was painted by some local youth, which is nice. It's the loveliest outer wall in town. So to head home, I came out of that gate on the left and headed down the road, to the end up ahead. 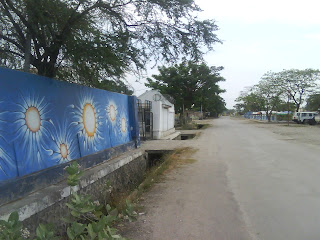 2. When I got to the end, I turned left again. Walking up along the river. On the other side of the river is the recently-inaugurated Palácio do Presidente (presidential palace, i.e. office building) 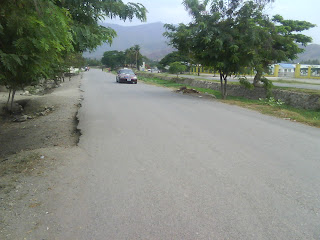 3. Heading up along the river for a few minutes... then a bridge comes into view. I'll be crossing that bridge into Bairro Pité, my neighbourhood (the one some think of as an inner-city ghetto - but I like it. My landlord is the like the mayor of the neighbourhood so no one is messing with us anyway).
Eventually, once I get to my house, I'll be by those palm trees in the background, the ones right in the middle of the photo. 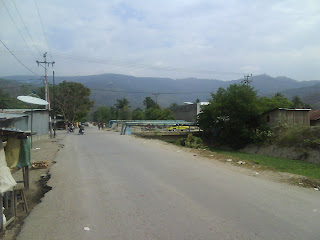 4. Crossing the bridge. Just after that white wall on the left is the entrance to the village-esque section of the neighbourhood where I live. 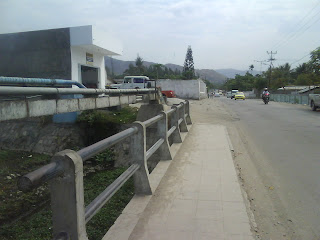 5. Not captured in this photo is a little kiosk, a type of corner store. That is the next door to the left of this photo, and is owned and run by my landlord's family. I get my water and my eggs there, as well as the odd sweet treat. My landlord's wife is a wedding cake baker, and she made my birthday cake. It's always a special day to get something from her.
Anyway, right after the blue and white building is the somewhat hidden entrance to my street. 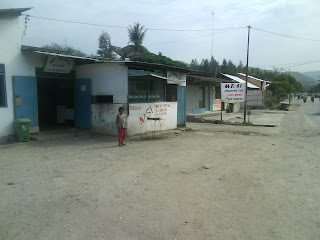 6. Heading up my street, I pass a few houses, a car wash, some cars and trucks, and a LOT of dogs. At this point there's a bend in the road and I'm almost home! That white house is the local gas company, so I can always count on being able to cook. 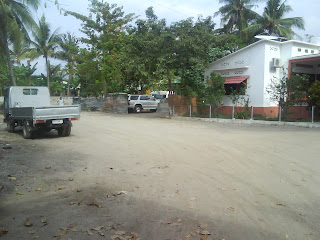 7. At the end of the road there are two green houses. My house is behind the second green house, but I park my car in front of the second green house. Yup, that's my big white NGO vehicle. Not mine, but I get to use it on evenings and weekends.
Soon, probably in the next day or two, the brown house in the background will be torn down. Then that will be my parking lot. 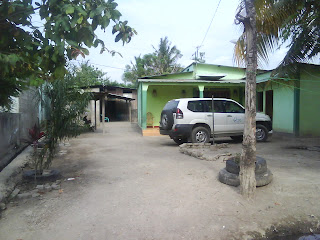 8. So I walk past the second green house, and as I'm entering the brown house (the one that's about to be torn down), my pinky house comes into view. An oasis tucked in the back of the village compound that is my home. 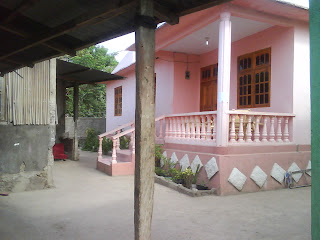 9. I walk up the stairs to my house, and voilá! My veranda furniture is there waiting for me. I bought it so that I could enjoy the evenings with my landlord's family and the neighbours. About a half-hour drive out of Dili is a town where they make the stuff. I just drove there in my big white NGOmobile, negotiated a price and the guys spent half an hour trying different arrangements before it would all fit in the car. It was so worth it. 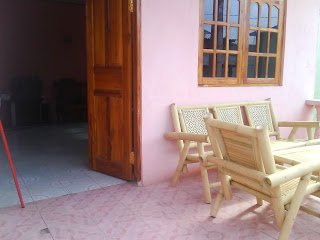 What you didn't see in this photo were animals and children. I think it's because I took them in the middle of the afternoon, when it was hot and people were either sleeping or beaching. Usually, for an authentic scene, you would add a few dozen kids, plus pigs and dogs of varying sizes, chickens and a cat or two.
Posted by Kati patrianoceu at 8:52 AM