Moses the trekker and mountain climber
There are two ways to get to the top of Mt. Sinai, although I only knew about one of them when we arrived at the hill. One route is called the 'camel path' and is a 6 km trail with a constant upwards slant. At the end, are 760 roughly hewn rock steps to the top. The top of the mountain is so steep that I don't imagine there's any alternative to steps, other than good old fashioned rock climbing. 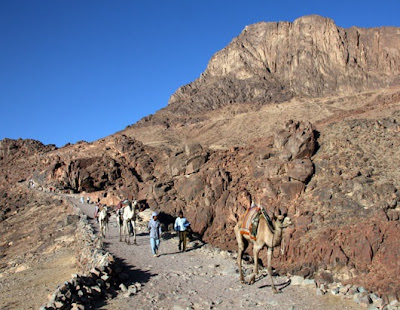 (photo credit: http://abcnews.go.com/widgets/mediaViewer/image?id=8573745)
The other way up is steps and steps alone: 3700 or so. Apparently they leave from somewhere behind St. Katherine's monastery and head straight up.
So as I was climbing up the camel trail, and then the steps, I became more and more aware of the fact that Moses was apparently in his 40s when he went up the mountain to meet with God and collect the commandments. I'm thinking that a man in is 40s back then was probably equivalent, in terms of physical fitness, to a man in his 60s or more now. I'm also thinking that his sandals were not very good. Finally, I'm thinking that the steps and the camel trail date back no more than a millennium or two, not four, which means that he scaled that hulk of rock.
My respect for Moses during this trip grew a great deal.
Because I also recalled my visits to the lovely Mt. Nebo, where Moses apparently saw the Promised Land before dying. 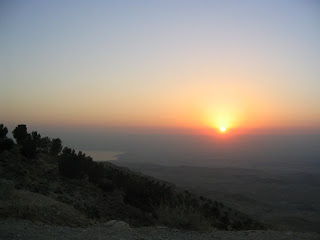 According to scripture, there was an occasion on which Moses got full of himself and equated himself with God, and his punishment was that he would never set foot in the Promised Land. But God would let him see it at least, after the people finished their 40 years of wandering in the desert. They wandered for 40 years because the first time they came close, they sent some scouts to check it out who told them about how awesome it was and how strong the residents were, so they got scared. God told them they shouldn't be scared and to make sure they learned their lesson, he'd let a full generation pass by before they entered the land.
So, Moses led them through their 40 year desert trek and never got to set foot in the final destination. The distance from Mt. Sinai to Mt. Nebo is long, and very, very dry. Scorching hot desert. It wouldn't take anywhere remotely near 40 years, though, and I imagine the extra years were spent in places like Eastern Jordan and Saudi Arabia: places even hotter and dryer yet.
Moses was one resilient man. He climbed that mountain, multiple times, then led the world's greatest ever desert trekking expedition, during the ages roughly from 40 to 80. Then he climbed another, much much gentler mountain, to see the promise which would remain forever out of his reach, and die.
My admiration for Moses is exponentially greater after this Sinai trip.
Posted by Kati patrianoceu at 5:30 PM