**dear imperfect prose friends, this last week I went on a little pilgrimage to climb Mt. Sinai and visit St. Catharine's monastery and am writing a little about my experience each day. I chose this chapter to share with the group, but maybe you'd find another chapter more interesting - take your pick :)
"This is the most beautiful sunrise I've ever seen. And the sun hasn't even risen yet!"
So said my colleague as we sat next to a boulder in hopes that it would shield us from the worst of the wind, her bundled in a blanket, my other colleague alternating between blanket and walking around to keep warm, and me tucked deep into my hoodie.
Behind us, boulder. To our side, chatty Russians. All around us, an entire sky bursting into visual song.
Except for the bedouins hawking blanket rentals and the Russians discussing poses and clicking their cameras, the silence was piercing.
The day before, sitting on the beach in Sharm el Sheikh, I'd pulled out my Bible and opened to the book of Exodus, to get in the mood for this pilgrimage on which I was embarking. Here is just a snippet of what I read in chapter 19:
On the morning of the third day there was thunder and lightning, with a thick cloud over the mountain, and a very loud trumpet blast. Everyone in the camp trembled. Then Moses led the people out of the camp to meet with God, and they stood at the foot of the mountain. Mount Sinai was covered with smoke, because the LORD descended on it in fire. The smoke billowed up from it like smoke from a furnace, and the whole mountain trembled violently.
After reading that, I'd arrived at the hike truly half-scared that I would be struck dead the moment I set foot on the mountain! Instead, the proverbial mountaintop esoteric silence illustrated just how great an event it was on that day when God revealed himself, possibly in this very spot (of course, historians dispute which peak in the area is the true Mt. Sinai). This was not a place where thunder and lightning was ever likely to strike, and there was nothing flammable for miles that might produce smoke. No fire, no storms, and I was certainly glad that the mountain was not trembling violently as I sat up there! 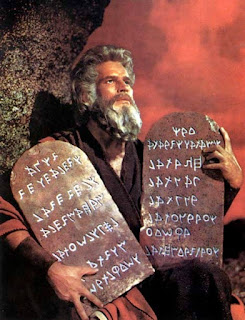 A few chapters later in Exodus (chapter 24), the tale goes on to describe how the mountain's top was covered by a cloud while Moses met with God. Again, this stark, quiet desert setting had no hints of potential cloudage. This was a story in which God truly showed up in style.
The third and final chapter that I read on this Sinai pilgrimage was Exodus 32, the famed story of the golden calf, that scene in which Moses (Charlton Heston in
the Hollywood classic) breaks the stone tablets out of anger. My thoughts on this chapter warrant a blog all themselves, but suffice it to say here, that I can see how Moses sided with God in that story. Standing on that mountaintop, heaven feels about two inches away. I guess in Moses' case, he was in a cloud so he couldn't see the sky, but instead God was even closer yet! Meanwhile, looking straight down those hundreds of feet of cliffs, the camp of the people must have looked like another world entirely.
Being up there is being with God, and how could the sunrise from a place like that be anything less than the best?
Posted by Kati patrianoceu at 5:52 PM

This experience sounds awesome. And I use the word awesome in the most literal sense. The awe inspired by walking in the footsteps of the patriarchs. Being were God reveled Himself to Moses. Thank for sharing. This story is precious.

Wow. I can only imagine what that must be like. Thank you for letting me live it vicariously through you...

wow. would be so cool to walk that mountain where the stories are written about and imagine what it must have been like for moses...very cool ponderings...

What an interesting thought about the improbability of naturally occurring lightning/thunder and smoke! I have never thought of that in connection with those Bible passages. Thanks for the insight!

a visual song... oh kati, how you met God here, and how we did too. thank you.

Interesting-- to be there and read those passages and experience at a different level! Thank you for sharing, Kati.