كاترين
While I've long been curious to see Mt. Sinai, both for its biblical significance and for the beauty described by friends of mine who made this trip many years ago, the mountain was not the driving force between making this journey. 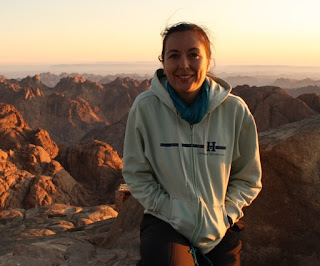 During my very first week in Syria, I asked a woman who spoke both English and Arabic if there was a name that I should adopt in Arabic that was similar to my own name. Everywhere I've lived, I've tried to translate my name as I learn the language, and it seemed appropriate to do the same for my time in Arab lands. The woman said that there was no need, that "Kathryn" is actually a comm
on name in Arabic.
It turns out that her statement was not exactly true. I have yet to meet an Arab woman named Kathryn. But what I did learn, and come to appreciate more and more over the years, is that I am named after the patron saint of the monastery that lies at the foot of Mt. Sinai. St. Catherine's monastery (it's all spelled the same in Arabic, even if we have dozens of spellings of my name in English) is a spiritual destination for many Christians, particularly of the Eastern Orthodox tradition.
Ever since I learned this, I've had a heartfelt desire to see "my" monastery, feeling that there was some important personal connection to this place. Now that I've been there, I have decided that I'm mostly very grateful for the heritage I have in my namesake's story. During this trip, I finally learned a bit of history about this woman who was important enough to have one of the oldest and most venerated Christian monasteries in the world named after her.
The story of St. Catherine is mainly legend, and apparently the Roman Catholic church no longer includes her name day as a mandatory feast because there's not enough conclusive proof that she ever lived. But her story lives on and will inspire me.
She was born in Alexandria to an aristocratic family. Legend has it that she was very beautiful and very intelligent. I like her already. Her birth name was Dorothy, and she converted to Christianity in her teens. Catherine was her baptismal name, in Coptic I think, and it meant Stephanie in Greek. (This is an awesome coincidence since my mother's name is Stephanie.) 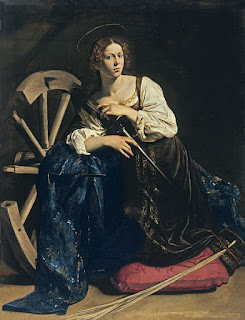 Shortly after her conversion, she was talking with the Empress and Catherine convinced her to convert to Christianity. The emperor was naturally furious and he apparently brought together 40 of the brightest intellectual minds in his kingdom to persuade Catherine back into paganism. Instead, Catherine persuaded all 40 of those men to become Christian.
Other events must have transpired, and finally the emperor decided he wanted to marry this intelligent and beautiful young woman who had charmed so many. (I love that this is the way a woman with my name is described.) So he presented her with an offer of marriage, saying that if she turned her back on her newfound faith, he would marry her. She refused, so the emperor condemned her to death using an instrument of torture, a water wheel. Miraculously, though, when she was on the water wheel, instead of her body being crushed and pulled, the wheel exploded. The flying bits of wood killed a few of the onlookers.
So the emperor had her beheaded.
Legend also has it that her remains were miraculously transported to Mt. Sinai where they still remain.
I am so thrilled to have such a fabulous heritage.
Posted by Kati patrianoceu at 5:30 PM

That is really interesting!

Wow! That is quite a story about quite a woman! Love the photo!! I love how many dimensions you've brought to your experience on Sinai. Awesome, Kati!

What a fascinating story. I love the stories of the saints. I'm glad you were able to visit YOUR monastery. I think names have much to do with who we are. :)

Thanks for reading my poem and finding the joy in my suffering. (I am only kidding, it was meant to have humor)