On our trip to to Upper Egypt last week, our assigned task was to find out everything there is to know about women, specifically their needs for economic empowerment.
So we did a bit of networking, called around to friends of friends, most of whom were former colleagues of current colleagues, and rather quickly managed to arrange dozens of meetings with local NGOs. Meeting other types of people (businesswomen, professors, average women) was not so easy but we managed a little something. But the local NGOs were eager, even thrilled, to meet with us.
Because it gave them an opportunity to do this: 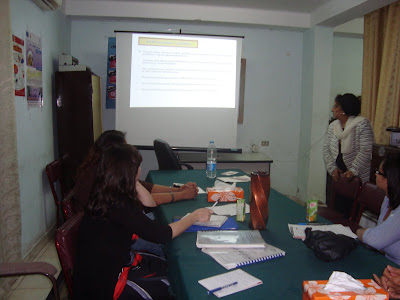 I know it's not a new concept, but can I just say, again, how effective powerpoint presentations can be as a lullaby?
Apparently someone, someday, probably a representative from some donor representing some wealthy Western country (I couldn't imagine which) came to town and trained local NGOs on how to be a good organisation, including how to make a splash. I'd wager that that visit happened sometime after the invention of powerpoint but before the coining of the phrase "death by powerpoint", and well before anyone invented guidelines such as "no more than four lines per page and no more than five words per line."
No, these powerpoints are thorough and long. Some NGOs have years and years of experience and every... single... project... gets... its own slide. For example, one NGO we met told us they have implemented 43 projects, and every single one got its own powerpoint slide filled with words. Fortunately, this particular NGO was also hyper about photos so there was something to look at, but still. After the introduction slides and the concluding slides, which included things like a full organisational chart and a description of their decision-making mechanisms and the history of their founding, we were treated to 43 project slides.
That's not what we wanted to meet them for! We wanted them to tell us about the needs of women. We wanted to - heaven forbid - ask them questions! But when you only have one hour scheduled for a meeting and 43+ powerpoint slides to navigate, there is not much time left for question-asking, especially because by the end we were in that peaceful sleepy-dreamy place of an afternoon nap.
There is, in fact, a reason why they put us through this torture. It's not entirely because they thought we'd be entertained or educated. It's because, misguided though it may be, they were thinking they could impress us. They'd love to work with us, and were hoping we would be so pleased with what we've heard that we'll go back to our main office and tell them how amazing such-and-such an organisation is.
Posted by Kati patrianoceu at 9:06 PM