So after my little angsty interlude yesterday I'm back to sharing some travel tales of our week in Southern Egypt, aka Upper Egypt, aka the Saieed. Incidentally, many Westerners seem inclined to call it "the Upper Nile" and that one is wrong. It's got enough correct names so there's no need to tack on a wrong name, right?
Today I thought I'd share a bit about what it's like actually traveling there as a foreigner (and why I was so shattered upon return - although to truly appreciate that you'd probably also need the schedule of meetings we had lined up in each place. It was a lot):
Day 1: Wake up at 2:30 a.m. for 3:00 departure to airport for 4:45 departure to Luxor. Luxor is a hot tourist attraction here in Egypt, home to the famed "Valley of the Kings", a very hot desert with some amazing historical artifacts. So they have their own airport but it would be a little cheeky to start ahumanitarian programme there (although right now that tourism is low, they really are suffering). Arrive Luxor 5 a.m., drive to Qena city, which is 1 hour north.
Night 1: Make history as the first women ever to stay in Hotel Hamd. This entailed occasions such as reception forgetting to give me my change, the clerk not understanding why I was asking him to go down to the all-men's café to order my coffee for me, management failing to stock the hotel with toilet paper and all staff refusing to go out and buy some, the hotel not giving us towels or sheets. Oh, and the best moment was waiting 15 minutes because there was a guy praying in the middle of the lounge area outside my room, and I didn't want to "ruin" his prayer because a woman walked in front of him during his prostrations. All these special moments aside, we were absolutely exhausted from the previous night's travel schedule, so I couldn't tell you for sure, but I think the room was very comfortable.
Day 2: Travel 2.5 hours by hired car, north to Soheg. On the way to Soheg get picked up by the fuzz because we're approximately the third foreign people in a decade to go on a road trip from Qena to Soheg.
Night 2: Enjoy the Nileside breeze, with a cup of tea and some cats in a stately old mansion which has been converted into a hotel. The rooms were spacious but not luxurious, but the air conditioning worked and the showers spewed hot water. What else does a girl need? Meanwhile, consider celebrating someone's marriage with them downstairs as the dance music wafts through the facility, and brainstorm ways to not only feel pity but actually help my poor Egyptian friend who is fielding phone calls every 10 minutes from some 'official' asking questions about us (including things like 'where did you go this afternoon?' as if they weren't trailing us the whole time).
Day 3: In a different hired car, trek 2 more hours north to Assiut. Because of traffic and a late arrival, we had to go to a meeting before checking in to our hotel, which actually turned out to be nothing but delayed gratification.
Night 3, Day 4, Night 4: Sleep, and enjoy the only few minutes of downtime all week, on a boat. 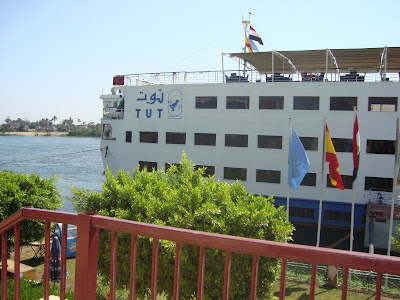 Our rooms were Nile view, which meant that out of my enormous window I saw lots of water and palm trees on the other side of the river. It was perfect. Except that the airconditioning in my tiny ship cabin didn't work and I couldn't open my window, so the best solution I could come up with was to keep the curtains closed with the hopes that no heat from the sun could enter the room. One of the mornings I did so happen to wake up for a potty-break right at sunrise and it was gorgeous. Unfortunately the appeal of the still beat that of the sunrise and I lasted no more than 3 seconds.
Day 5: Though we were supposed to catch a train at 7 a.m., we managed to hire the car of a friend of a friend and leave at 9:30 a.m. to travel 2 more hours north to Minya. Arriving in Minya felt like we'd exited the badlands and were back in civilization. Not that Assiut or any of those places were really badlands, but Minya felt posh.
Night 5: Stay at a hotel right on the Nile which was also breathtakingly beautiful and the site of a wedding party. It was only a pity that we were way, way too exhausted to enjoy it. I was also getting a bit sick from some bug combined with bad diet and no exercise for a week.
Day 6: Three hours further north and we were back in Cairo. The Kempinski never felt so much like a homecoming.
Posted by Kati patrianoceu at 9:34 PM