"Can I play some Angry Birds?"

"Well, then, can I watch you play Angry Birds?"

This conversation has repeated itself almost daily since I've been in Virginia. The lover of Angry Birds is my almost-three-years-old nephew. The nay-sayer could be any adult in the household. The boy is truly enamored by that game. As he drifts to sleep at night, we can hear him over the baby monitor talking about pulling birds in a slingshot, using egg layers and bombs, and hitting the pigs with the birds. The greatest achievement in his short life has been winning levels on Angry Birds. 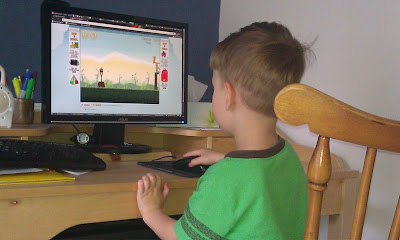 At first I though that this was my nephew being three. Little kids get obsessed about things, usually the most obscure and unexpected things, right?

Well, not this three-year-old. He's totally down with the latest trends. Last week when I ventured out to visit some extended family, I was reading about smartphones with my aunt. She's looking to buy a new phone. One of the features most commonly advertised was the ability to play Angry Birds on such-and-such a phone. We read the reviews to see what consumers thought of these phones, and some of the comments we read included things like: "This phone gets really hot while playing Angry Birds", or "Angry Birds runs slow on my phone."

That afternoon, I walked by a phone shop and the display was a big picture for a Samsung Tablet featuring Angry Birds. In big bright colours.

I've played a bit of Angry Birds. It's kind of fun. I'm far from addicted and my only motivation for playing is to unlock levels for my nephew so he can play on my phone. But it's kind of fun. I guess. But really? What is it with this game that has taken over the nation?

Posted by Kati patrianoceu at 1:38 PM

i wish i knew. my 10-year-old has only watched his sisters play a FEW times on their cousin's phone. . . . and suddenly he had to pick a folder and notebook with angry birds on them, is constantly pointing out angry bird stuffed animals to me, and noticed angry bird posters at the store. angry birds, angry birds, angry birds! and "they" say that we're all oblivious to advertising??? ha! if you find the answer to your question, i'd like to know, too. i'd also like to know how to create a game this popular :-) not that i want MY kiddos becoming addicted to it. . . . . LOL.
steph

I love Angry Birds. I'm over the initial addiction, but it's still my "go to" distraction in boring meetings. Playing under the table on my iPhone. :) I guess I'm still 3 years old.

It is crazy. Every age group of society is playing. Have to admit; I am behind the times though!

Steph... that's amazing! I don't know if I should get my nephew a stuffed angry bird for his birthday or better not feed the addiction. At least the posters and stuffed animals aren't technology, though!

Happygirl, you really make me laugh.